Sunrise at the lake 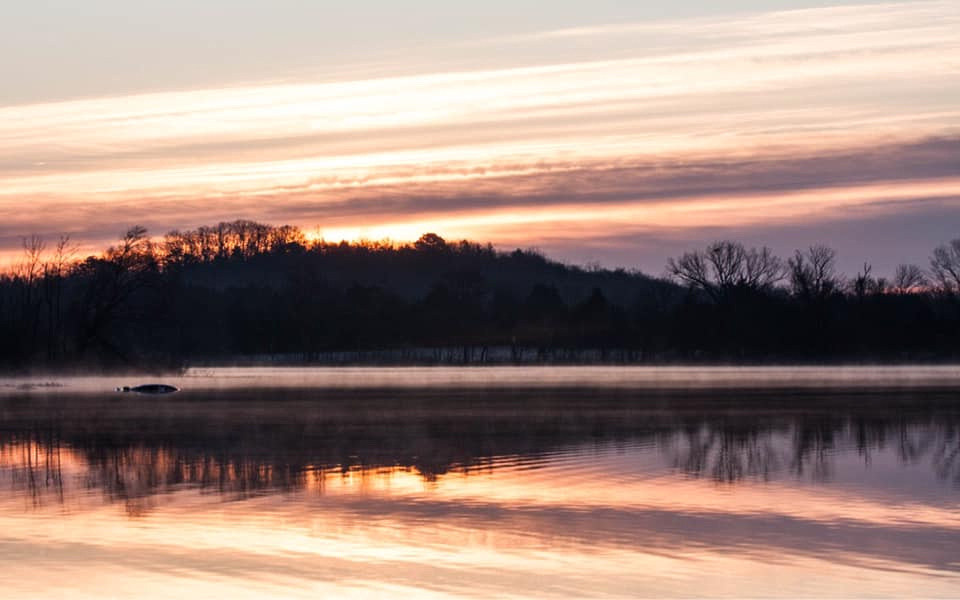 Arrived early to capture the sunset rising and hoping for some great reflections on Charleston Lake. I was also hoping to capture a few bald eagles with my camera. Since it was January in Arkansas, eagles were still visiting before they migrated away sometime in early March. As I drove into the parking lot it was marked off with yellow crime scene tape. Thankfully the crime scene words were turned in and only the yellow back was showing towards me. There was one parking spot available so I parked and was ready for this next adventure.

It was 26 degrees on this Saturday morning, i had multiple layers on with the last layer being camouflage. I looked like the Michelin Man with camouflage.  I made my way past the north of the lake crossing over the small spillway to a wooded area. There was some ice on the spillway so stepping was slow and easy on this cold morning. I waited hidden anticipating the eagles to land in their favorite trees however they had different plans this morning. It was now Go time since the sun started rising with its brilliant colors.

In the wooden area there was a broken dock that extended past the edge of the lake. Choosing which board to step on or step over was the challenge. I setup my tripod on the dock facing the east taking shot after shot of the rising sun. It was partly cloudy this morning and the light was perfect. As I was shooting with my camera I noticed something in the water on the east side far away from. me. I continued to look at it and thought maybe it was a small capsized boat. I grabbed my long lens and captured some shots of this object in the water.

Time to go explore, I moved off the dock and crossed over the small spillway. This time i noticed the water was running pretty nicely and running north east. I heard a car driving up towards the parking area and noticed it was a police officer. Remembering I was in camouflage and always carry two backpacks, I raised my camera up and started taking pics towards the south end of the lake so he would see I was a harmless photographer and not a hunter at the lake in the offseason. I stayed along the water's bank when I heard the low roar of rushing water. No one told me there was the possibility of a waterfall in this area. There was an opening in the bank and I slowly walked down to the waters edge. Turning to the left was a small 3' waterfall that had caught my ear. I took several shots and then making my way back up the bank, crossed over a nice wooden bridge to the other side of this spillway created stream. This approach gave me some better angles of the waterfall. I then kept going and noticed a small 12" drop near the spillway which created a very clean waterfall that just happened to have some ice formations on some brush near the waters edge. This happened to be one of my favorite shots of the day.

I had left my backpacks on the other side of this stream so it was time to retrieve all of my gear. i started to pick up my camera backpack and when I did my small 24mm wide angle lens popped out and started rolling down the bank towards the water. I quickly set down my camera on the other backpack and ran down carefully the bank to retrieve my lens. The lens mount side of the lens had the cap on it however the other end of the lens with the optics was not covered by a lens cap. This was the lens side that was in the water. I grabbed up the lens and shook out the water as best as I could at the time. We are always learning lessons in life and I was hoping and asking God to help me with this unfortunate lesson I had just learned. A week later the lens completely dried and is ready for the next adventure.

Time to put my gear back in the truck, take off a couple layers and head back towards home. It was now just a little past 9:00am and I was ready for a homemade breakfast from my wife in our kitchen. As I was pulling away from the lake a police officer was coming down the street. I flagged him down and said Good Morning Officer, asking him if he had recently seen any eagles at the lake and that I was hoping to take some photos. He told me he had seen 4 a few days ago. He then said - I thought you were taking pictures of the car. I said - What car? He responded "the car in the water back there" while he pointed to what i had thought was a small capsized boat in the water. I laughed and told him I was focused on the sunrise and didn't pay close attention to what it was. I asked the police officer what had happened and he told me some young guy went joy riding the other night. I later found out this young guy stole the car out of someone's yard and was driving down the street at a high rate of speed and did not know the lake parking lot became a dead end at the water's edge. He drove the car into the water and was able to get out unharmed. He was later found and charged for his breaking the law joy ride.